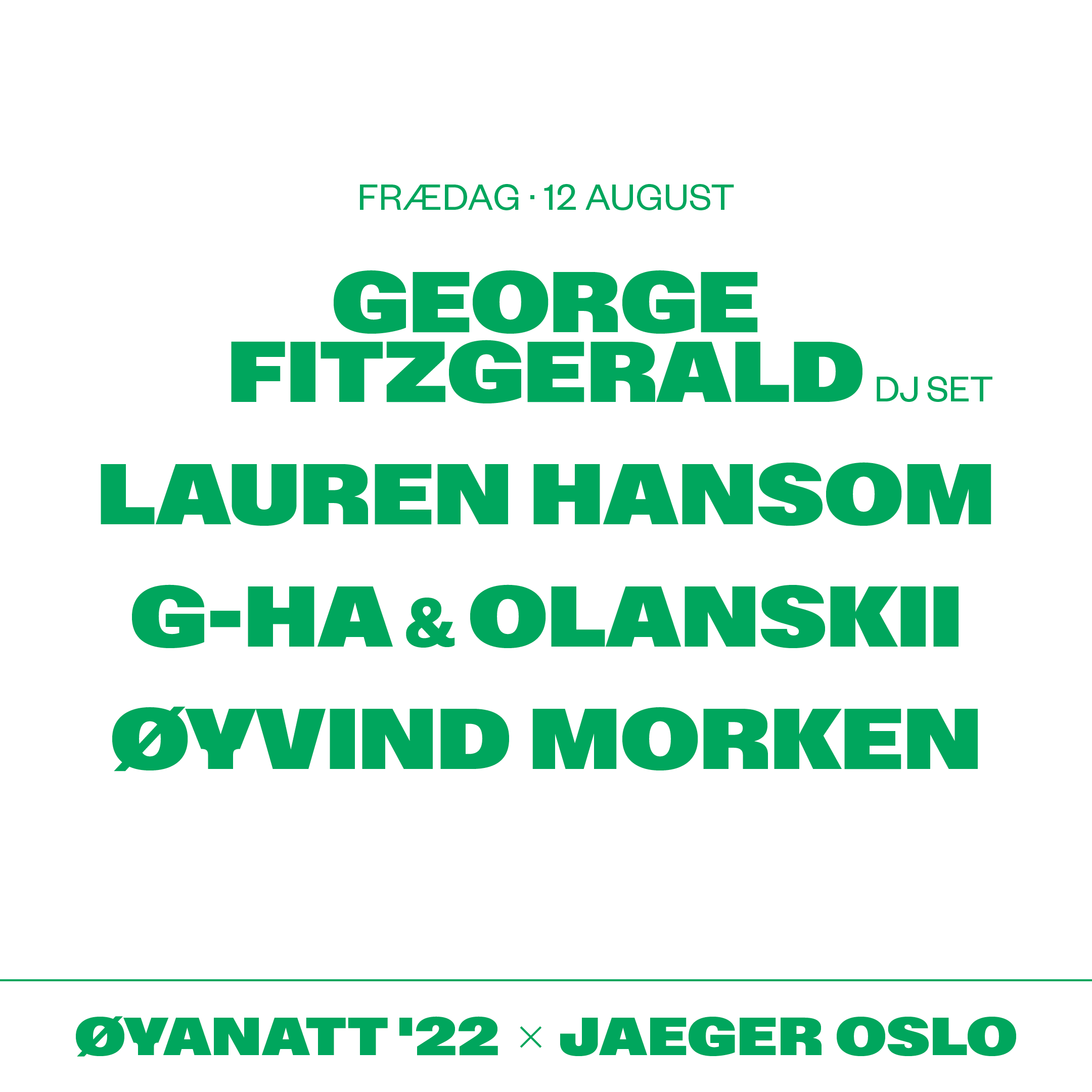 In the well-established tradition of Øya and Jaeger, we take on the nocturnal duties for the annual Øya festival again in 2022. As the grassy knoll in Tøyen park dies down, we coax the sound-systems into life with a week-long line-up featuring some of our favourite and consistently good international guests. The pocket book strings get stretched to the limit for this one.

Not least at Frædag, our weekly window to the world. g-HA & Olanskii swing the doors far and wide for this one from Australia to the UK. Lauren Hansom joins the Øya Natt lineup from the pacific isle, while George Fitzgerald brings that UK sound. From the slowed-down psychedelia of Lauren Hansom’s introspective sets to George Fitzgerald’s deep, but impulsive House sets, Øya Natt reaches it peak as we step into the weekend.

George Fitzgerald is an English DJ and producer, who spawned a career out of the bass-heavy incantations of UK’s post-dubstep scene. His first few records came via esteemed underground labels such as Hotflush, AUS, and Hypercolor where he found much success with records like Child back in the early 2010’s. Today he is an established album artist with records like “Fading Love” and “All that must be” drawing people from the far fringes of the dance floor to his music.

Australian native Lauren Hansom has been bending musical rules with oddball selections weaving through genres and eras across the continents. Her unprecedented approach to narrating dance floors has brought her quickly into the club and festival circuit making appearances at Dekmantel’s Lente Kabinet, Kala Festival, De School, Salon des Amateurs, Horst Music & Arts Festival and Opium Club to name just a few. For Lauren, music is endless and there are no boundaries when it comes to her exploration of it.

Two pivotal bodies in the sphere of Norwegian electronic music, g-HA & Olanskii are an event, a club, a DJ duo, and a musical authority for Norway. Individually adept as DJ, selectors and tastemaker, Ola “Olanskii” Smith-Simonsen and Geir “g-HA” Holger’s musical voices unified for Sunkissed, an events series that has become the backbone of Oslo’s electronic music scene and  beyond.

Oslo`s Øyvind Morken (pronounced Oy-vind) has a unique ability to play everything from A to Z of what genres concern. Working the dance floor in the most unexpected ways. For the last nine years he has held down a residency at Jaeger. Eight of them weekly under the Untzdag banner, a wordplay for Onsdag, Norwegian for Wednesday. It became an institution in Oslo. Drawing in a crowd of open-minded party freaks for nights of wild abandon, and where musical diversity and self-expression was encouraged.